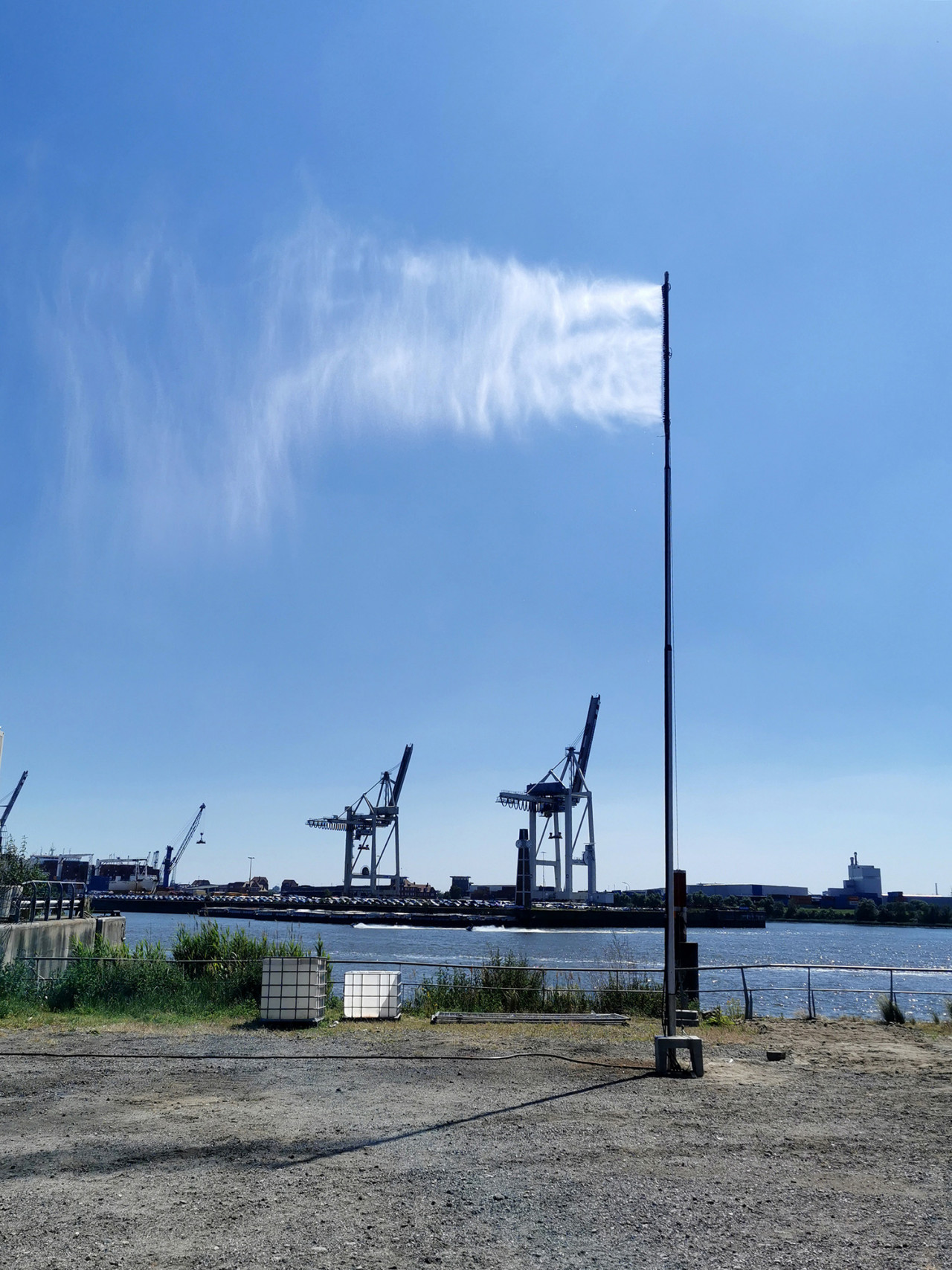 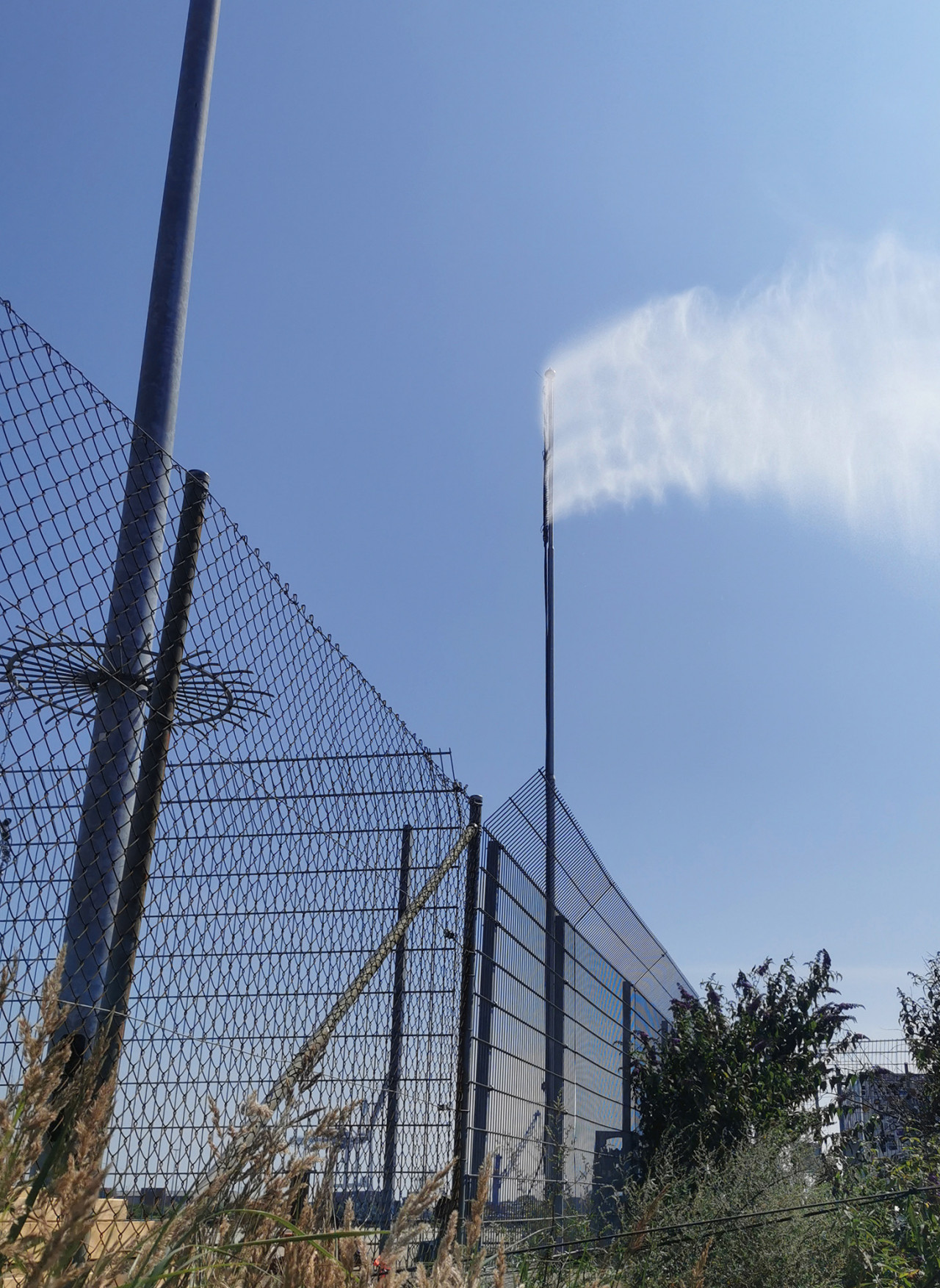 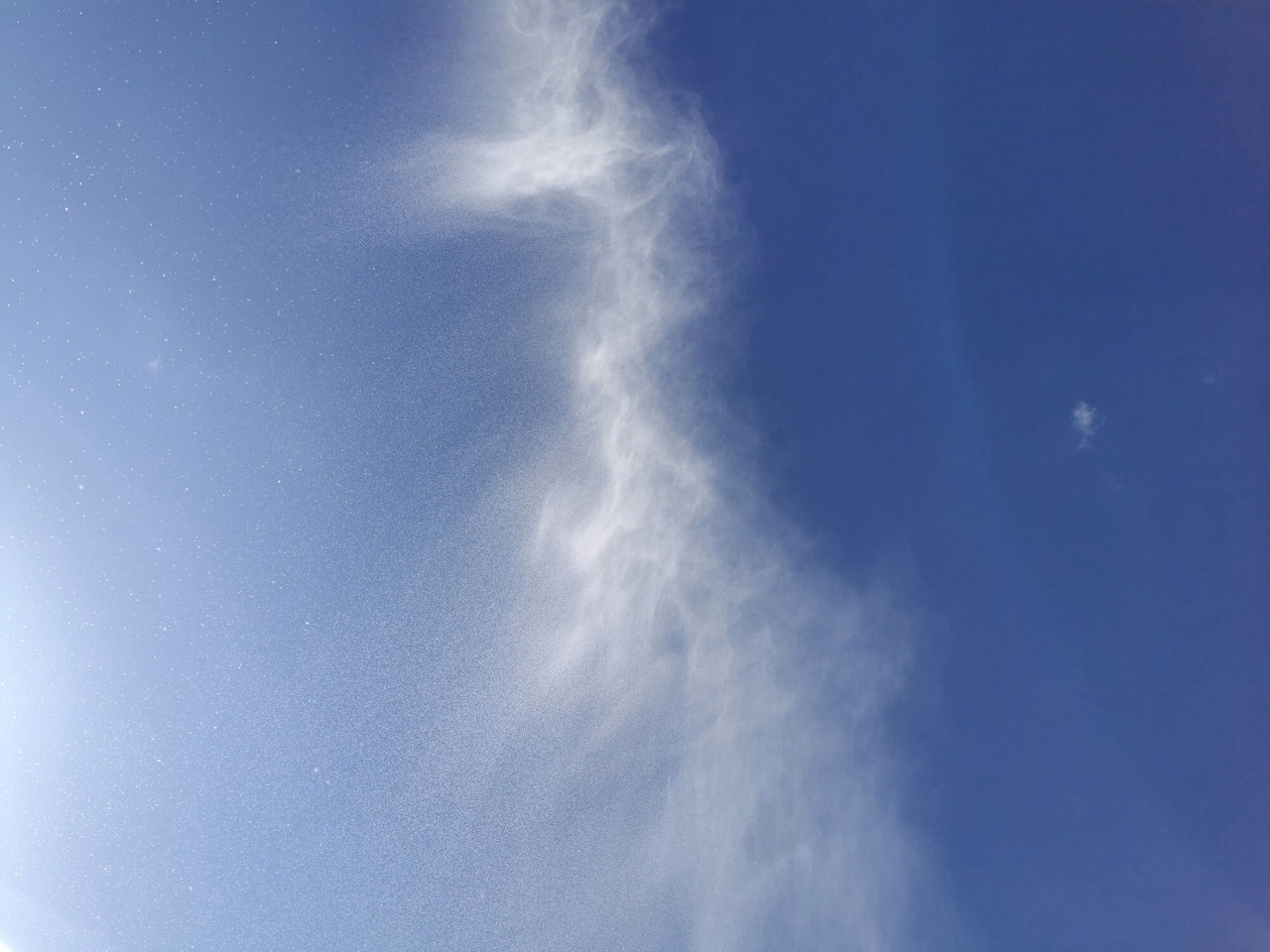 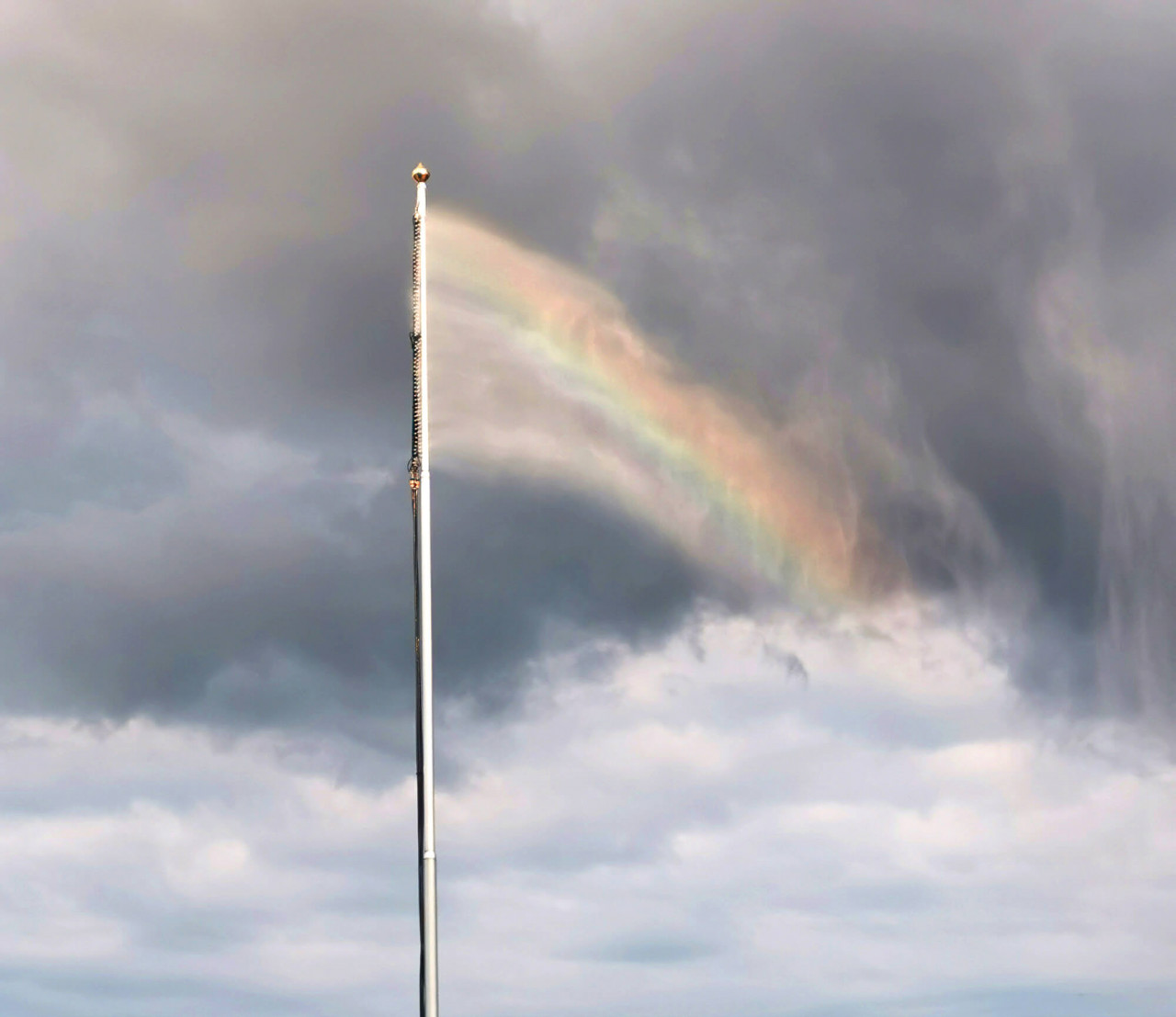 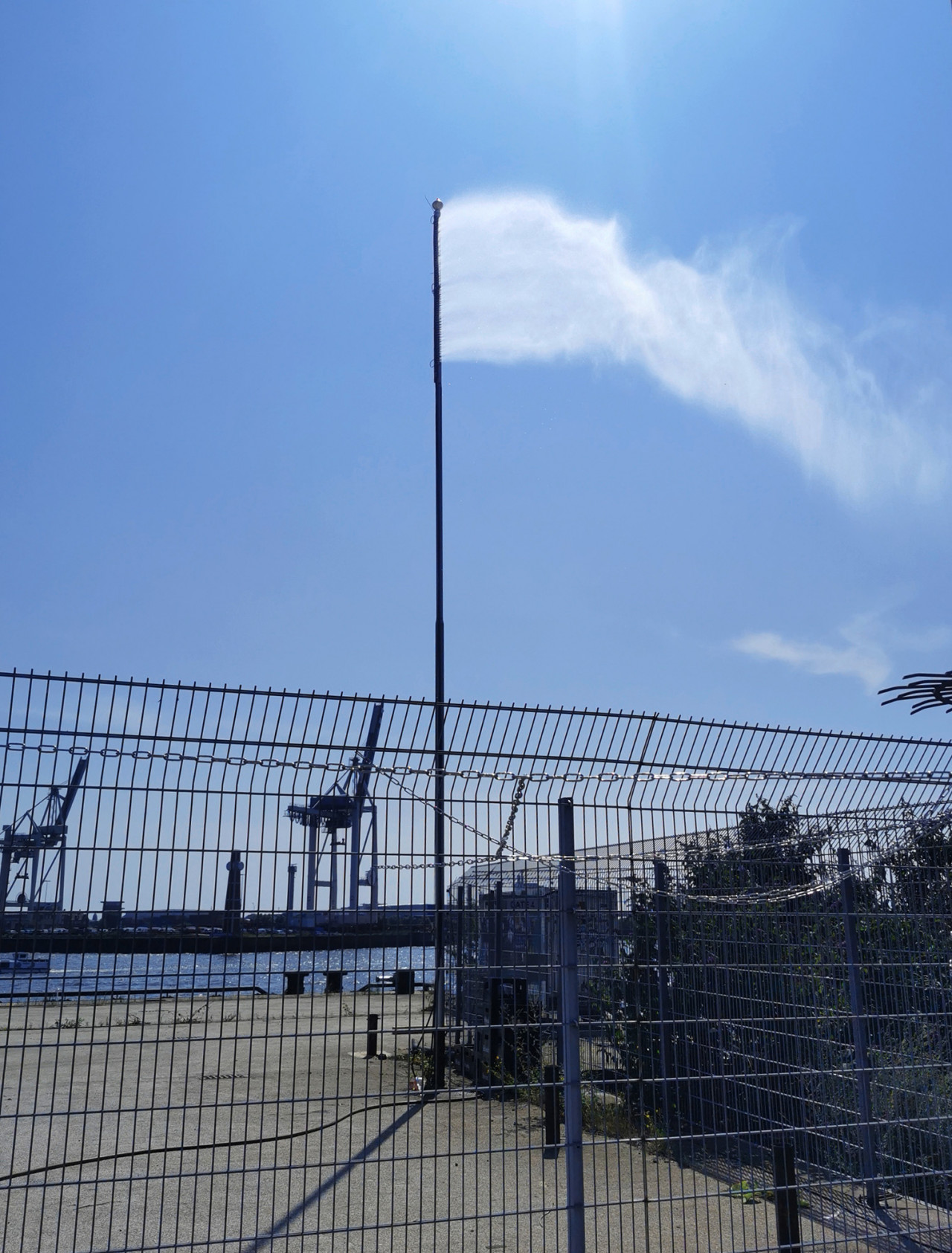 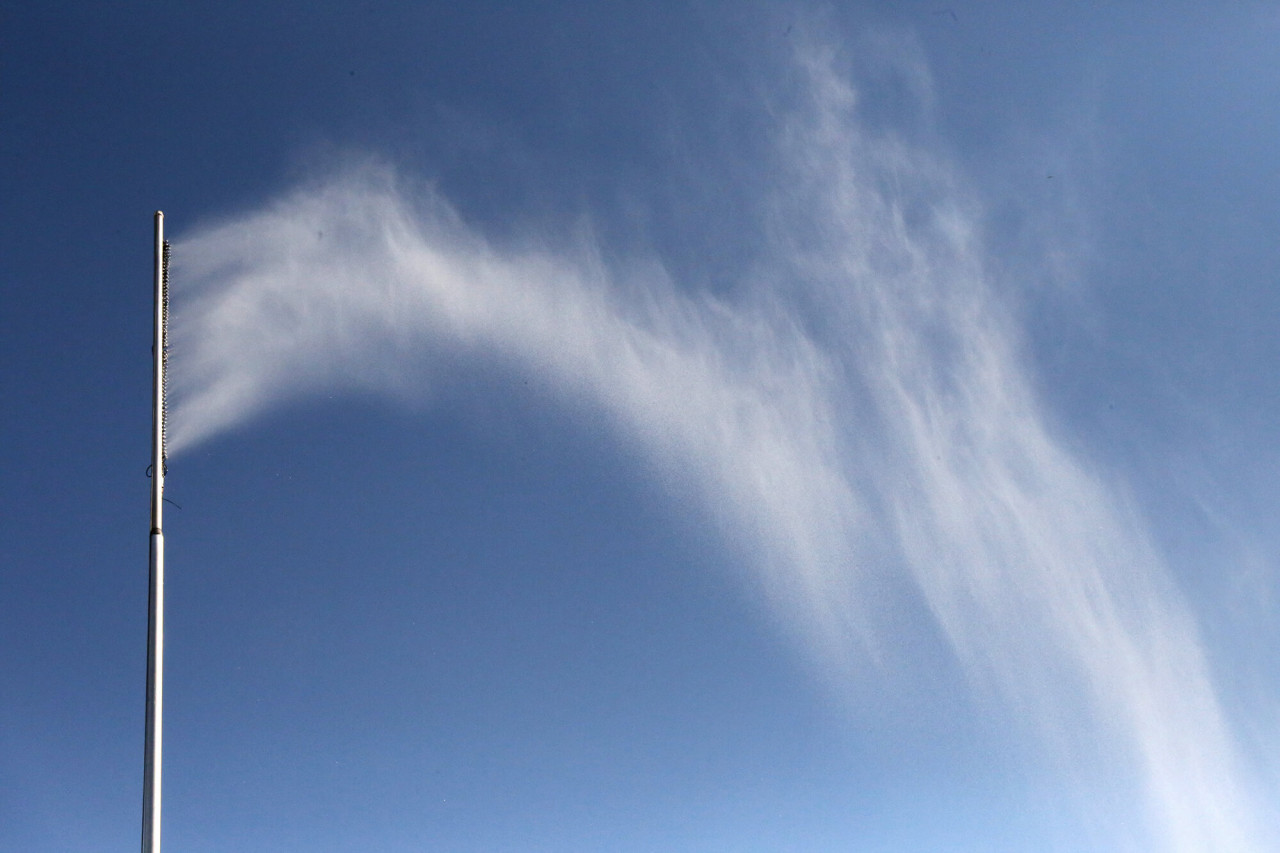 The Installation was shown at: Hamburger Kultursommer”.
It is made of water, flagpole, spray nozzles, water pump.
//
The flag, a symbol which is understood like hardly any other sign in all countries of the world.
In its capacity, it marks an affiliation, indicates privileges and rights of a group of people or nationality. At the installation dissolve a flag is replaced by volatile water spray and is installed on a flagpole.
Since antiquity at the latest, “the flag” - the respective tribal or field emblem, ruler’s symbol, religious insignia, and national symbol - has through its visible and tangible presence in ceremonial and often warlike gatherings, evoked loyalty to one’s own community and the goals and ideas set for it.
The predominantly emotionally based acceptance of the symbolic message was reinforced by the nimbus bestowed on most flags by their religious legitimization on the part of the respective priesthood.
Thus, the flag itself acquired the character of the sacred. Especially in the Catholic countries of Europe, the custom of consecrating the flag has survived into modern times.
Similar to specific colors or ornamental symbolism on flags (red for socialism/communism, crescent moons for Islamic states, crosses for Christian, the rainbow for diversity and tolerance, etc), the flag created from water spray can be interpreted for life itself.
Without the existence of water, life on earth would not be possible.
At the same time, the spraying represents an ephemeral existence, both on the direct level:
All life inevitably begins and ends, matter decomposes and becomes one with its environment, just as water diffuses into the air.
But also in a figurative sense:
Empires, states and organizations pass away, thus their flags become relics and the material from which they were created decays itself with the time.
Furthermore it can also be interpreted as a symbol of the fragility of our existence in times of increasing ecological threats.
Water has always been a scarce commodity in many regions of the world, wars are fought over who has or gets access to this resource, Companies buy springs and regulate or withdraw access, states build dams or divert water, etc.
Thus, on the one hand, the water flag is volatile in several ways: water flies through the air and dissolves into it; it represents the volatility of the institutions represented by flags.
On the other hand, through its form, it questions and counteracts the attributions, levels of meaning, and handling of “classical” flags; its fluidity contradicts the symbolic meaning they have acquired throughout history:
It cannot be touched, hoisted, or folded.

for
magic
to happen
we are having
cookies here!
learn more